See the WAEC General Mathematics Theory Paper 2, May/June. 2015 Past Question and Answers here. See the questions and the general answers from the marking scheme here.

(a)  Without using Mathematical tables or calculator, simplify
3

.
In part (b), it was reported that candidates’ performance was not as good as it was in part (a). Majority of them were not able to obtain the sample space of the outcomes which was tabulated as follows 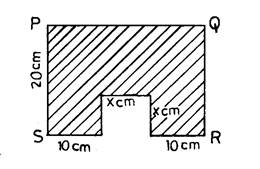 The diagram shows a rectangle PQRS from which a square of side x cm has been cut.  If the area of the shaded portion is 484 cm2, find the values of x.

The Chief Examiner reported that this question was also attempted by majority of the candidates.

In part (a), majority of the candidates were reported to have correctly multiplied through the inequality by the LCM of denominators, which was 8, to obtain 32 + 6(x + 2) ≤ 3x + 8. Simplifying this inequality gave the answer x ≤ -12.

In part (b), a good number of the candidates were reported not to interpret the question correctly and as a result could not obtain the resulting equation. Candidates were expected to show that the area of the shaded portion = area of rectangle – area of the square. Here, length of rectangle = (20 + x) cm and breadth = 20 cm. Therefore, 484 cm2 = (20 + x)(20) – x2. Expanding the bracket and simplifying gave the equation x2 – 20x + 84 = 0. Solving this equation gave the values of x as 6 cm and 14 cm.

(a)  The ratio of the interior angle to the exterior angle of a regular polygon is 5 : 2.
Find the number of sides of the polygon.
(b) 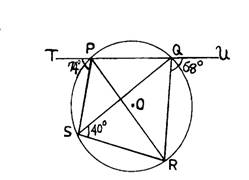 This question was also reported to be very popular among the candidates but they performed poorly in it. According to the report, their responses indicated a poor knowledge of geometry and teachers were encouraged to emphasize this area of the syllabus.

In part (a), candidates were expected to recall the formula for the sum of the interior angles and exterior angles of a polygon respectively. However, majority of them were reported not to show that each interior angle of a regular polygon was

while each exterior angle was

In part (b), majority of the candidates were reported not to apply the circle theorems correctly.They were expected to show that from the diagram, ∠RSQ = ∠RPQ (angles in the same segment). This implied that ∠PRQ = 68o – 40o = 28o (exterior angle of triangle PQR = sum of the two opposite interior angle). ∠TPS = ∠SRQ = 74o (TPS is the exterior angle of cyclic quadrilateral PQRS). Therefore, the required angle PRS = 74o – 28o = 46o

We have complied all the WAEC Past Questions and Amswers on mathematics. Click to buy your copy now.